We have been quiet for some time here, but it doesn’t mean nothing was happening behind the scenes! AdminProject is always being updated, in this release we introduce several important changes. We have received a lot of valuable suggestions from you and the most interesting ideas have been implemented. Without further due, let’s see what is new!

Inviting multiple users at once

It’s not a massive change, but should be useful especially at the time of starting a large project. This usually is time consuming, so why not make it a bit easier? You can now just paste list of email addresses and the rest will be done automatically. Voilà! 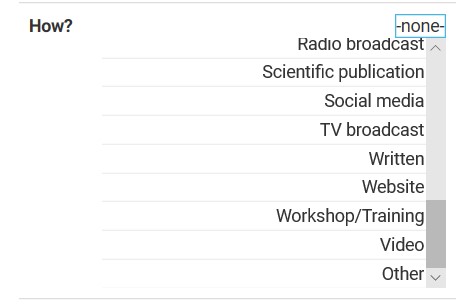 You wanted to have a more elaborate list of possible dissemination activities, so here it is! We took all your suggestions and after long discussions came up with the refreshed list that is now available to you. This list is about 50% longer than the old one. Have no fear, as the “Other” option is still there! In case nothing would match – it is the way to go.

Yet another feature that was requested is the ability to download Activity Stream as a CSV file for statistical analysis. The new link is on the Project Summary page, just below user list. Only project owners and administrators can see it. Just hit the “Activity stream as CSV” button and the file will be ready for you in a matter of seconds!

New way of selecting users in Tasks and Project Settings

This is a big change, users now are displayed by the organization and their role is coloured. We believe this will allow much faster selection of users for specific tasks. Remember that this feature works best if you have the your project team assigned to partners, which can be done in your project’s settings.

Possibly a bit controversial decision but after several reports from users we decided to implement it. As it turned out, those folders were confusing and not many people were able to use them. While they are still there, doing their job as usually, they are not visible if you go directly to Files.

The evaluation module was rewritten and optimised for larger datasets. In the past, exporting results from survey of 100 responses or more could take several minutes. Now the Excel file containing all results is ready in a much shorter time – down to seconds.

Besides those mentioned above, on the course of last months we implemented other under-the-hood changes, fixes and improvements. Those include updating sign-up and login methods via Google, LinkedIn and Facebook, due to changes in their respective APIs. Moreover, we fixed several bugs which users reported.

As always – we are happy to hear from you! Please contact us if you have any problems, suggestions or ideas.