Where do you start your catch-up on recent activities in your project? For vast majority of AdminProject’s users, ActivityStream is the main source of what others have been doing in the project. Some of you have suggested a few small, yet very handy improvements. Our devs came to the rescue!

To be fair, we’re unable to say that we have reinvented the ActivityStream. Nor can we say that is a totally new, improved, optimised, brand-new implementation of it. Worries aside though. We have redesigned it only a bit. This bit however, is going to make your life (and project management) easier, and it brings more clarity to the files being uploaded in your project space.

Now, every single upload will allow you to download the file directly from the ActivityStream. Before it was used to open the folder, where the file had been uploaded. It wasn’t particularly useful if you had many files in your folders, so we changed it. So basically, if you see the following entry in the ActivityStream:

you can do two things. By clicking the name of the file, you will get it downloaded. If you click on the name of the folder, this folder will be opened up for you, and the file will be highlighted (read on for details).

We’ve been asked to provide also a nicer way to indicate when someone uploaded a few files at one time. From now on, multiple uploads are more meaningful to you, as they look as follows:

As you can see, the upload of five new files has been indicated by listing the names of the first three files, while the other two are just named by 2 more. Now, again – click on any of the file name displayed, and you will immediately get it. If you click on the folder name (Report 1), AdminProject will open the folder for you, and all of the uploaded files will be highlighted as shown below: 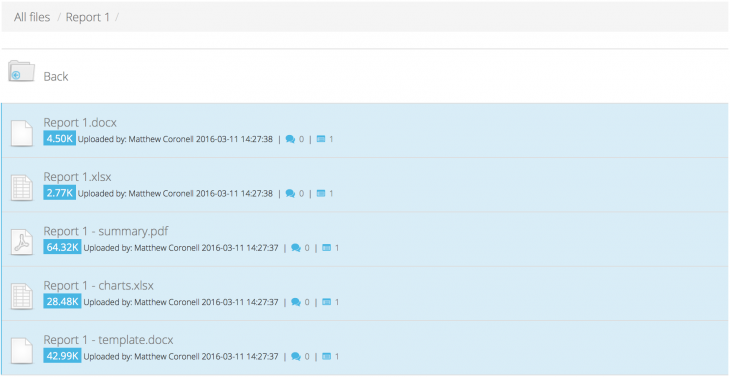 The highlighted files will have a blueish background, and they will be listed on top of other files in that folder.

We do hope that these improvements will make your life easier. We are constantly working on making AdminProject a better tool, so if there’s anything that could be improved, just drop us a line!